Get all the need-to-know details about the top-ranked Online MSW degree program.

Prepare for the future of social work in New York—and across the country—with Florida State University. Don’t let your location limit your education. Our online Master in Social Work (MSW) program is regularly listed as one of the best in the nation. Part-time coursework allows you to continue working full-time as you build your knowledge, practical skills and national network.

There are two options for earning your MSW online:

Advance Standing Program: For those with a Bachelor's of Social Work. Complete in 2 years with 1 in-field placement.

Traditional Program: For those with a Bachelor's in another area of study. Complete in 3 years with 2 in-field placements.

By 2030, the U.S. Bureau of Labor Statistics projects social work job growth will increase nationally by 12%.1 This translates to approximately 89,200 new job openings for social workers to make a difference. It’s estimated that nearly 75% of social worker positions require an MSW or higher qualification.2 Earning an MSW could elevate your impact, employability and earning potential by over $13,000 more than those with a BSW alone—based on various factors such as industry, title and location.3 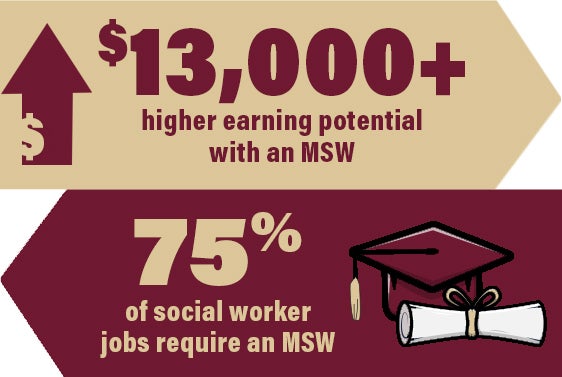 *GRE Not Required for those that meet the waiver requirements. Call, download your guide, or chat with us to learn more